Skip to content
No Comments on Wonders Of React Native [What is it? When and Why to use it?]Posted in Application Development By Nirajan PantheePosted on June 20, 2022October 19, 2022Tagged mobile development, react native

As a frontend developer here at Wolfmatrix, I was tasked to develop a mobile application using React Native – a cross-platform framework for developing mobile apps. Now, as a developer, I am always on edge about learning something new. And as a web developer, I have always been fascinated by and eager to work in mobile development. So this was an awesome opportunity to dabble my hands in the wonders of React Native and create something #wonderful.

So here I am sharing my experience working with it, what allowed for the switch, and the lessons learned from this endeavour. This article has been written from a “So, you are a web developer and want to build native?” perspective.

“Curiosity is a developer’s biggest strength.”

A curious developer never stops learning, be it for his career, a dream project or his own personal tinkerings. That zest rubbed off on me as well. I already had experience working with React.js and some relatively short experience in Android Development. So the next step was React Native.

As luck would have it, we got a project on our hands for a mobile application. In the meeting, the discussion was going on as to how we would proceed, and we came upon a choice for developing the app in either a React.js app rendered on an Android WebView or writing the whole app in React Native.

I began writing prototypes for both of these choices. While the Android Webview way would be easier in terms of the development process, there were challenges in contrast to developing in React Native. For instance, writing native code and accessing GPS modules would be a hassle. After some careful consideration, we decided to walk the React Native walk.

And thus began my journey.

What is React Native anyways?

But you may conjure up the question – “What makes it so special?” and I won’t judge you. It is a valid question if you consider that other frameworks fulfil the very promise – “single code, multiple platforms”.

The catch here is that while frameworks such as Ionic do develop applications that can be run on different platforms, their nature is such that the application is rendered on a mobile web view. We can call them hybrid applications, while a React Native app can be called a cross-platform application.

React Native differs from other frameworks as RN renders native UI components. This is what gives a React Native application a native look and feel. For instance, when you write a Javascript code to render any Text on the screen using the <Text> tag, React Native renders a native component to display the text on the device screen – TextView in Android and UILabel in iOS. The way this is done is through a Javascript bridge, which renders the Native Components for the device platform that it’s running on( I know, pretty slick!!).

Now that we have some insights into what React Native is,  let’s venture into developing a React Native application.

From the get-go, there are two ways to developing mobile apps in RN. The first is with expo – a framework to build React Native applications. The second is (you guessed it…) without expo.

As you can see in the above image, the left image has android and ios folders. They are missing in the one on the right.

Personally, I’d rather develop without using Expo as it allows for writing and reusing native code and functionalities. For the remainder of this article, we will be going the non-expo route 🙂

After the project has been initialized, the next step is to run the app on a device or an emulator. We will see that we have 4 predefined scripts. 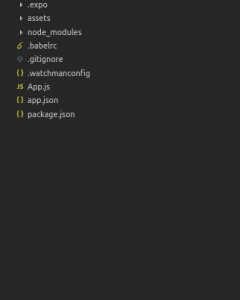 If you have been unlucky and ran into some issues while starting your app on the first try, you can check this Troubleshoot page by Facebook to solve known issues with React Native.

Now, that we have successfully run the app on an Android/iOS device, let’s get to the good stuff – The code 😀

The Platform module in React Native is used to write platform dependent code. It returns the platform, in this case, Android or iOS, and it can be used to render a different UI in android and ios devices or execute a piece of code depending on the environment that the app is running on.

React Native also allows writing platform dependent components by naming the component files as component.ios.js and component.android.js and just import the component name into your code. RN will automatically import the respective file based on the platform its running on, thus, eliminating the need to import components conditionally.

Every app out there is unique, has a different combination of colors, fonts, UI Components and an overall User Experience.

So, how would you introduce styling to a React Native Application? Well, if you’re coming from a background in React.js, you know the styling is done in CSS files or inline styling.

Unfortunately, RN does not accept styling in this way. Instead, styling in a RN application is done directly in the code. So, a styling in css such as {color: red} would be {color: ‘red’}, {font-size: 12} would be {fontSize: 12}.

The StyleSheet module in React Native is an abstraction similar to CSS StyleSheet. The key difference being the styling definitions are written using javascript instead of in a .css file.

As mentioned earlier, a React Native application is written using React, which uses jsx – writing HTML markup inside javascript. However, the elements that are used in React Native are very different than React. While React uses DOM elements such as div, p, etc. , RN uses a separate set of components to render its UI. For instance, p tags are replaced Text tag.

React Native UI is written using Facebook’s own Yoga library – a Flexbox implementation. If you are a frontend developer like me, then I’m sure you have worked with Flexbox in CSS.

“Flexbox works the same way in React Native as it does in CSS on the web, with a few exceptions. The defaults are different, with flexDirection defaulting to column instead of row, and the flexparameter only supporting a single number.”

The flex properties for the UI components are defined using a style prop.

Here is the full documentation for the layout props in RN.

As for now, there are various third party libraries that can be used for navigation. The most popular one is React-Navigation.

Although a react native application is mostly written in javascript, for the most part, often it so happens that we need to access some native functionalities of the platform, be it android & iOS, of which the javascript counterpart has not been developed yet. Think of some custom functionality that you made for that is specific to your application.

The reason for using native code could be that you have already developed the function in native code and would rather use that instead of writing it again in javascript, or it could also be to leverage the speed and performance of native realm.

Such a scenario presented itself in our client’s application as well. The issue was to link the application to Firebase and log the user details to Crashlytics. Since there wasn’t a readymade solution in React Native, we installed native firebase crashlytics libraries into the iOS/Android versions. Then we wrote wrappers in native code to access these native APIs from the javascript realm.

Here is the documentation on linking native libraries in React Native.

So, there you have it folks, a dive into the wonders of React Native.

All in all, it was quite a fulfilling experience to develop a mobile application using React Native. The look and feel of the app is same as that of a native app, almost indistinguishable from an application written in native platform language (Java or Swift).

So should you use React Native for your next mobile application? The answer to that question is a rather subjective one as it depends largely on your app requirements. An application that needs heavy computations or relies on native libraries might not benefit from it. But, if your app is a rather simple one, with a minimalist use for native APIs then React Native will make an awesome choice.

You can always check out React Native, build something awesome and help the ever-growing open source community of React Native by building custom libraries.

I hope this article has been helpful to you in some way.

Here you can check out the projects we did using React Native.

Passionate engineer who loves talking about Machine learning and ways to improve Software development practices. CEO and Director of Software Engineering of Wolfmatrix.

Discuss your business and tech needs

Get In Touch
Scroll to top